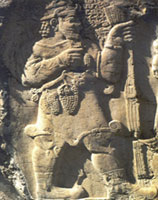 Wines have played an important rôle in Turkey since times immemorial and Cappadocia was one of the first wine-producing areas. It was in Asia Minor around 2 000 BC durng the Hittite era that wine-producing really began seriously. The Hittites created wines classifications and began exporting wine to countries of the Assyrian and Sumerian empires. They named the wine-producing area of Anatolia: Wiyanawanda - which meant "the wine country". With over 1,500,000 acres (6,100km²) planted under vine, Turkey is the world's fourth-leading producer of grapes. Mustafa Kemal Atatürk, Turkey’s first president, established the country’s first commercial winery in 1925. The majority of wines produced are white (beyaz), the rest are rosés (pembe) and red (kırmızı). Ürgüp is in the heart of the wine-producing region and hosts every year the International Wine Festival.

Kocabağ Wines is a family-owned wine producer and viticulture company located in Üçhisar district, Nevşehir. The firm has a storage in Gülşehir with an annual capacity of 300 thousands of litres. Mehmet Erdogan, the father of Hasan-Menduh Erdogan, established Kocabağ in 1972. His main purpose was to use the surplus of grapes available for producing wine. He hewed out a rock in his garden to build a cellar with a storage capacity of 150 thousands of litres. 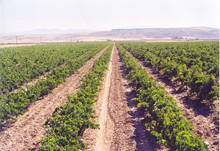 The company put its first bottle of wine on the market in 1986. Since then, they have gone from strength to strength developing their reputation for fine table wines. That reputation has led them to become one of the top five wineries in Turkey.

Established in 1943 by Hasan Turasan, schoolteacher at the primary school in Ürgüp, the Turasan Wine company is now managed by Hasan Turasan of the third generation. Turasan was a small vintner up until the 1990s, when the boom of the tourist industry hit Cappadocia and Turasan's production continued to grow until it attained de 1 million litres in 2003. Turasan's factory can be found in Ürgüp and the company owns vineyards throughout the region. 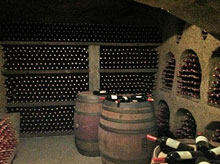 Stocking grapes in caves has a beneficial effect on quality of the wine, because the constant temperature (8 à 10°) improves the quality of the wines. You can find various different grape varietals in Cappadocia, the best-known are Kalecik Karası, Öküzgözü, Boğazkere, Narince and Emir.

Kalecik Karasi is a Turkish grape varietal and a Turkish wine produced from this grape. This grape and wine are called by the name of area, the Kalecik district of Ankara Province, Turkey. Kalecik Karası grows successfully near the Kizil River and is used to make some of Turkey's best red wine. Kalecik Karası grapes are famous for their unique taste, aroma and flavor.

This unique quality has been honoured with several awards won in International wine contests, and has attracted the interest of Turkish wine lovers. As a result, Kalecik Karası has become much in demand among domestic wines in recent years. The Kalecik Karası grape of Central Anatolia, which was on the brink of extinction due to long neglect, has taken its deserved place in viticulture, thanks to the long-term efforts of Turkish and French experts and Ankara University Faculty of Agriculture. Because of high demand, this grape is now also cultivated in other parts of Turkey with similar climatic conditions, such as the high grounds of the Denizli region. This special prestige wine has the colour of a ruby stone, is rich, well-balanced, and has an aroma of red fruit, vanilla, and cocoa. It has a light, fresh, and elegant finish. The wine has an alcohol ratio between 12 to 14%, and an acidity range of 4 to 7 gr/l. Best served at 16 to 18°C (61 to 64°F).

Emir represents twenty five per cent of local grape production in Cappadocia. Emir is the only Turkish grape exclusive to Cappadocia and thrives on the harsh, cold winters and the high altitude of the area (around 1,200m). Emir flourishes on the volcanic soils of Cappadocia, rich in minerals. Emir has slightly oval, green-yellow, middle sized berries and is used in sparkling and still wine making. The wines are light-medium bodied, light yellow colour, delicate and have high acidity.

Narince is a grape with a very fine skin. Dry and semi-dry wines can be made with Narince grapes. Narince makes straw-yellow coloured wines with floral notes, yellow fruit and citrus aromas.

Wines produced from Narince are usually dry and because the acidity level is high, the wine gains a complex bouquet with ageing.

You can enjoy wine-tasting in Ürgüp in the local wineries. Turasan is open for visits of the factory. Situated on the hill overlooking the town of Ürgüp as you leave on the road to Göreme, it is easy to recognise as you will see the tour buses parked outside. Turasan is mainly specialised in group tours but you can request a one to one visit.

You can taste Kocabağ wines in their wine-tasting facilities over the Han Çırağan restaurant (no need to book, they are open all day and until late at night). In this locale housed in a magnificently restored caravanserai in Ürgüp, you can taste a wide range of their traditionally-produced wines guided by the expertise of the dedicated sommeliers.